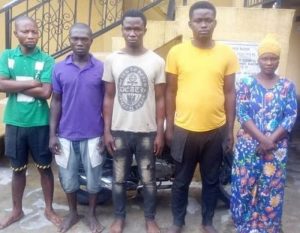 The five suspects were arrested for allegedly killing a young man who was wrongly accused of stealing a phone and dumping his body in the lagoon.

It was jungle justice in Lagos as a 22-year-old man who was wrongly accused of stealing a cell phone has been killed and his body dumped in the lagoon.

Already five persons have been arrested by the police in connection with the murder.

The sad news was that the son of the woman who raised the false alarm that sent the young man to his early grave was the culprit who allegedly stole the phone. The young boy has confessed to the crime.

The Police Public Relations Officer in the State, DSP Bala Elkana, said that five suspects had been arrested for allegedly killing a young man who was wrongly accused of stealing a phone and dumping his body in the lagoon.

He said on July 9, Langbasa Police Station received a complaint that on July 8, at about 8pm, that one Olamide Omolegbe, 22, was killed.

The deceased was accused of stealing a mobile phone by Mrs Bolanle Muhammed in her soft-drink shop at Bodore, Ajah.

The false alarm she raised led to the beating and killing of the victim by Wasiu , Ibrahim , Adebayo, and Adegbite. The four persons actually beat up the guy and when he died, they threw his body into the lagoon.

His body was recovered by a team of detectives led by the Divisional Police Officer, SP Ada Okafor, at Badore Jetty and deposited at Mainland Hospital Mortuary for autopsy.

“Five suspects including the woman who raised the false alarm were arrested. Wasiu, who is the principal murder suspect and Adegbite were arrested inside the lagoon where they hid in order to evade arrest.

“Investigation revealed that the phone was actually stolen by the son of the woman who wrongly accused the deceased person.”

He said the Commissioner of Police Zubairu Muazu, has ordered the State Criminal Investigation and Intelligence Department (SCIID), to take over the investigation of the case.