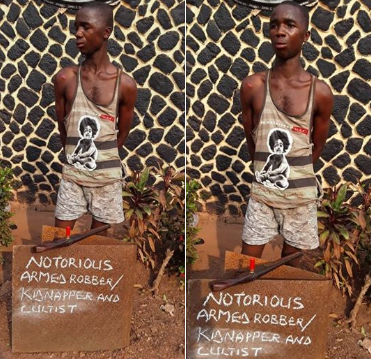 A suspected notorious Cultists and daredevil Armed Robbery/Kidnapping kingpin who has been a torn in the flesh of members of the public within Oji River Udi Axis of Enugu state, has been nabbed by the operatives of the Oji River Division of the Nigeria Police Force in partnership with Neighbourhood watch group and National Drug Law EnforcementAgencies operatives in Oji River.
A statement from the command says the suspect identified as one Chibuzo Agu of about 23 years old, from Amaokwe Udi but residing at coal camp, had tried to steal a motorcycle at gunpoint from its owner at the popular “wonderful market” located in Oji River.
However, an alarm raised prompted a hot chase of the suspect and his gang members by the combined team of the police operatives accompanied by the Neighbourhood watch group members and NDLEA Operatives in the Area.
The hot chase however paid off as the suspect Chibuzo Agu was later arrested at Umuabi in Udi local Government Area of Enugu state while manhunt and search for other fleeing members of the gang have been intensified.
The arrested suspect is now helping the operatives of the state police command in their investigations in relations to his Cult leadership(cappoon),other high profile cases of cult activities in Enugu and 9thmile axis including Assasination, Armed Robbery and kidnapping.
Recovered from the suspect is a gun and a cartridge.