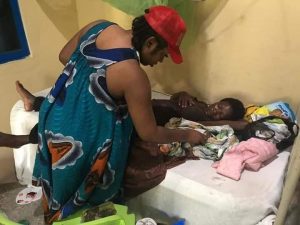 According to a news released by “Abia Breaking News”, Some hospital staff have been suspended over alleged gross misconduct and negligence towards a patient in Calabar, Cross River state. It was gathered that on Friday evening, a pregnant woman in labor was brought to PHC Mayne Avenue. Rather than hospital workers helping her into the labor room, they demanded for N20,000 for surgery and allegedly pushed the woman out of the facility when she didn’t pay despite her pain. It was alleged that a trained nurse named Eme Bassey used mop stick to beat the woman, claiming that she bit her hand with her teeth.. The pregnant woman went to the grass in front of the facility where she struggled on her own to deliver her baby and was aided by a member of the community and other passer by. When finally the woman put to birth, the youths in the community went into the health facility to move the said nurse out to ensure she assisted the woman. It was then she reluctantly came out to help the woman deliver her placenta and finally let her into the facility. The Director General of Cross River State Primary Healthcare Development Agency, Dr Betta Edu when called, arrived the facility in complete shock that women could give such treatment to a fellow woman. The DG, with immediate effect suspended all the staff involved and the PHC coordinator who supervises then. All staff involved are to face disciplinary committee and night face tough sanctions including dismissal if the board so decides.