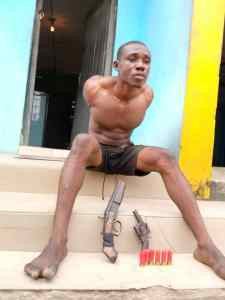 A member of a notorious kidnapping gang that has been on the wanted list of the Intelligence Response Team, IRT of the Nigerian Police, identified as Darlington Olewumbu has been arrested by men of the Abia state police command. Confirming his arrest, the spokesperson of the Abia state police command, Ene Okon, said Olewumbu was arrested by a team of detectives led by the Divisional Police Officer, DPO, Ndiegoro Division SP Alphonsus Ayang, at Agu Street, Ndiegoro community. Items recovered from the suspect include one locally-made revolver pistol with live ammunition, one locally-made double-barrel shotgun and 6 live cartridges. Upon his arrest, the suspect confessed that his gang were about embarking on another kidnapping mission before he was nabbed Okon said efforts are being made towards the arrest of the other members of the gang. He added that Olewumbu will be charged to court once investigations are completed.