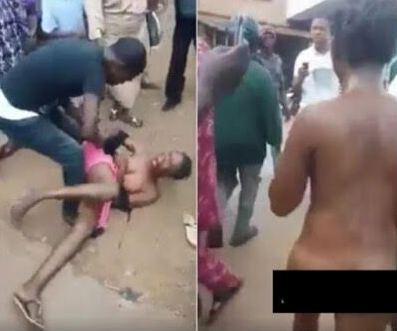 This is quite sad! A female thief was nabbed by a quite “ Hot” Ghanaian crowd in the PZ Area in Adum, the Central Business District (CBD) of Kumasi. It became apparent that those who lynched her were Hot, when they pressed her butt, and Forcefully opened her legs to show her genitals. Some men in the scene showed no sense of humanity in them as they forced their legs into her privates – it’s reported that the lady, who was clad in only a red bra, tried stealing GH ¢1,100 belonging to a certain shop owner, but wasn’t lucky, as she was caught red-handed.

More people are adding their voices to condemn brutality meted out to a Nigerian woman who was stripped naked and pounded in the private part for allegedly stealing yam. Executive Director of the Ark Foundation, Angela Dwamena Aboagye is one of the many gender activists who have condemned the act perpetuated against the woman. She said, “Look at the manner in which they purported to arrest her, they stripped her and look at the acts of violence that were perpetuated against her. When it comes to women, this also sits within not just a social justice framework or criminal law framework, but within violence against women which is completely a human rights issue as well.”